How to make report inheritance in FastReport.NET

When you are tasked with creating a large number of reports within one corporate style, you face the problem of duplicating some information, design styles in each report. As a rule, public reports (documents) in a company have the same header with name and contact information. Let's say you have 50 templates with the same header. But the company address changes and you need to open each template in the editor and correct it. But if there are not 50 templates, but 100, it's a real headache.

Avoiding this problem is helped by the inheritance mechanism, where you have a template that can be used in different reports. Changes to this template will appear in all inherited reports.

Report inheritance in FastReport.NET is organized as follows. You start by creating a so-called base report from which you inherit others. This report should contain a template with information common to all inherited reports. For example, it can be a header with the company details.

It is also worth bearing in mind the restrictions on inheriting the report. You may not:

Now let's look at an example of creating an inherited report. First you need to create a basic report.

For example, it will contain a report template with the title:

Save this report with a name containing base, so that it is easier to find amongst the other report templates.

To create a legacy report you need to use the legacy report wizard. This is available either in the welcome screen or in the new report window (File->New):

Newly added objects will no longer have this icon. Add a data source to our report and place the fields on the "Data" band. For example, you can use the demo data source nwind.xml from FastReport.NET: 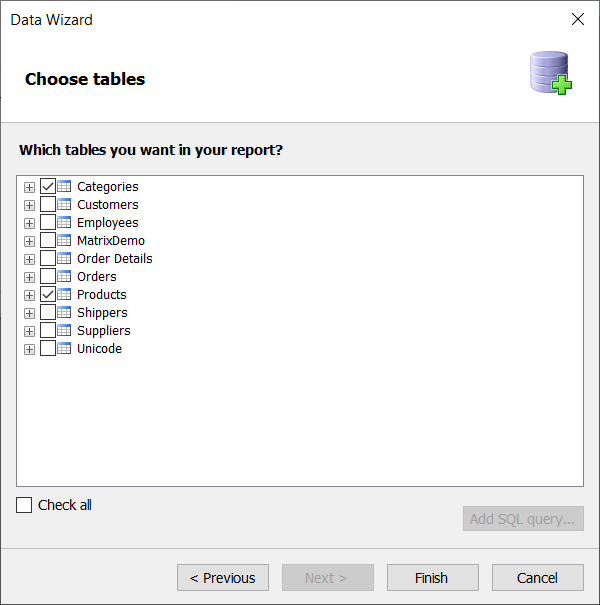 From the data source we select the Categories and Products tables. These tables are linked by key and so we can easily create a Master-Detail report:

As you can see, the added data fields and the Header and DetailData bends do not have a padlock icon. You can always tell the difference between the legacy report objects and the baseline report by this feature.

This way you can create a large number of reports in a single style, and then easily edit them all by changing only the basic template.