CODE 128 is the barcode developed by Computer Identics Corporation (U.S.A.) in 1981. CODE 128 can represent all 128 ASCII code characters (numbers, upper case/lower case letters, symbols and control codes). Since it can represent all characters (except Japanese kanji, hiragana and katakana) that can be used with a computer keyboard, it is a computer friendly barcode.Code-128 can be very compact due to the "double-density compression" of data, when two numbers are written into one barcode modulus.

The Code-128 barcode contains 107 characters,103 of them are data characters, 3 start, and 1 stop character. To encode all 128 ASCII characters, there are three sets of Code128 barcode characters - A, B and C, which can be used within a single barcode.

The basic composition is as follows:

The structure of the Code128 barcode is quite simple. The barcode consists of 6 zones:

Code-128 barcode symbols consist of 3 bars and 3 spaces (6 elements in total). The bars and spaces are modular in width from 1 to 4 moduli (1 modulus = 0.33 mm). The character width is 11 moduli.The stop symbol consists of thirteen modules and has 4 bars and 3 spaces.

By the way, "Modulus 103" is used in this barcode as a check digit. According to the Code-128 barcode symbol table, each character is assigned a corresponding value. Then, for each character, except for the “Stop” and the control character, a weighting coefficient is assigned, 1, 2, 3, ..., n. In this case, the symbols "Start" and the first character following it are assigned a weighting coefficient equal to one. The check digit is calculated as the sum of the products of the weight coefficients by the corresponding values modulus 103. The check digit is located between the last data symbol and the "Stop" symbol.

Code-128 can change the encoding type in one barcode. The following figure shows the transition from Code-C to Code-A. 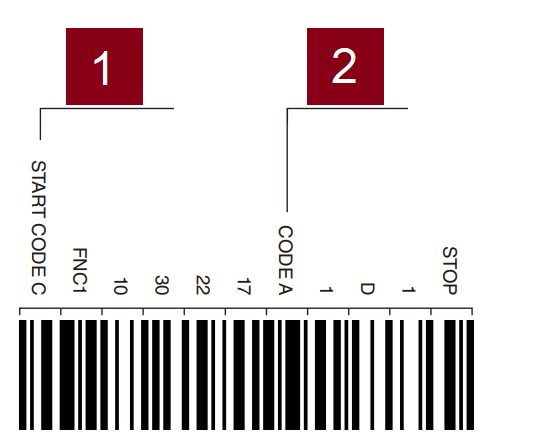 When CODE-C is used as the start character, one bar pattern can represent 2-digits numbers, it is the so-called "double-density compression". This allows for increased data density. The example above is just this case.

If the barcode data has 12 or more digits, CODE 128 provides smaller size than ITF and EAN-128. 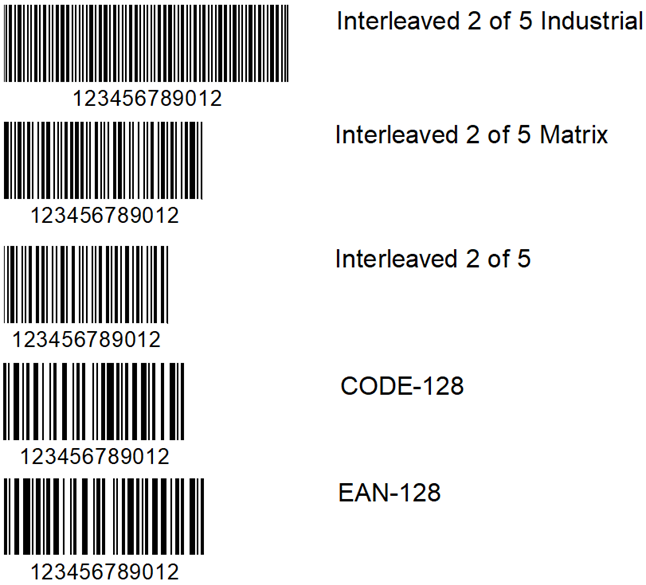 Since CODE 128 uses 4 types of bar size, printers with high print quality are required. CODE 128 is not suitable for printing with dot matrix printers and FA ink-jet printers and for flexographic printing on corrugated cardboards.

CODE 128 is used in the following industries:

Creating a barcode from code in FastReport VCL

Creating a barcode from a code in FastReport .NET

Now you know a little more about the Code-128 barcode and its varieties A, B, C.