Integration with Cloud in FastReport Mono 2023.1 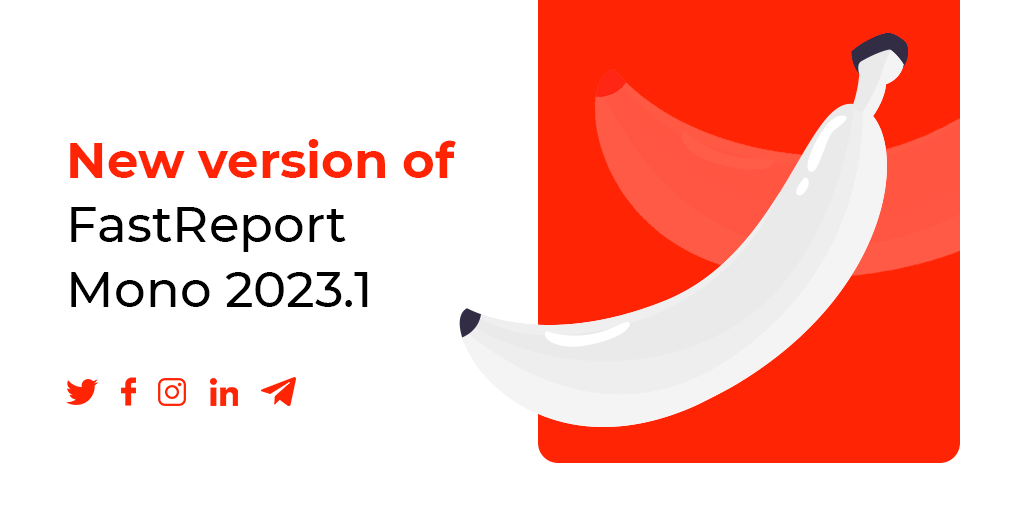 In the New Year's release of FastReport Mono 2023.1, we added: partial integration with My Reports Cloud, template converter from JasperReports, connection to stored procedures in MsSQL, improved the MSChartObject object and much more.

Now you can download the report from Cloud and work on it in the designer, or vice versa — upload your files to Cloud. 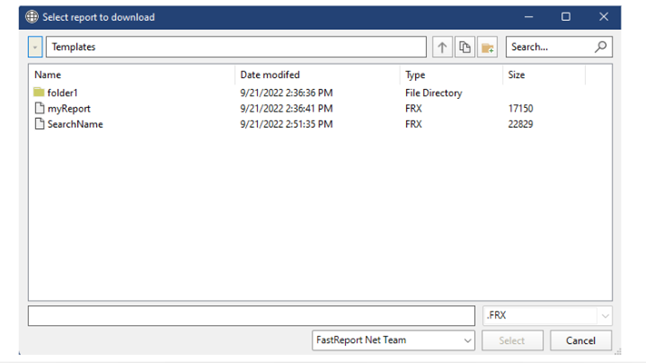 A web preview function has also appeared in addition to the standard preview. The report can only be viewed this way if it was opened from Cloud.

FastReport Cloud can store connections to data sources. From now on, you have the option to add these data sources to your report. 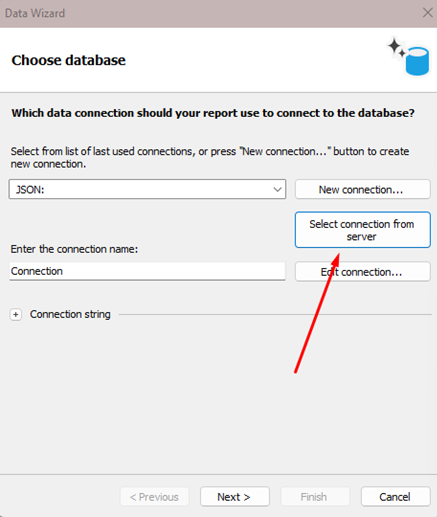 It also became possible to add the connection to Cloud.

Read this article to learn more about the new features.

Now the report validator runs in a single thread. The speed of its work is significantly optimized. You can notice the changes in processing reports with a large number of errors. While the validator is checking the report, the check window shows a respective message. 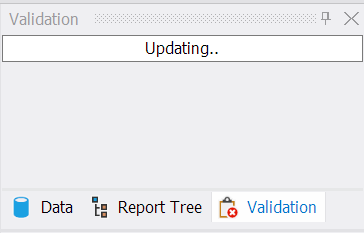 In this case, you can edit the report. A table with errors will appear upon completion of the validator.

For convenience, we have added a new column with error numbers. Its display can be enabled or disabled via the table context menu. In the same way, you can customize the display of the error type column. 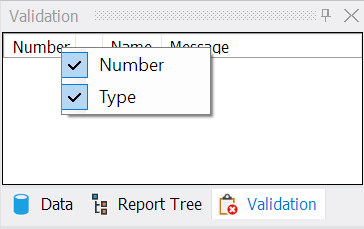 We have added the option to convert report templates from JasperReports to FastReport .NET templates. JasperReports reports may contain objects that are not supported by the FastReport designer. These objects will not be converted or will be replaced to make the generated report as similar as possible to the one created in JasperReports.

Read more in the article.

The MSChartObject object has many properties and settings. The most frequently used ones are moved to the object editor. Properties that are not available in the editor can be modified using the Object Inspector. However, there was a problem with these properties — when they were changed, the report was not seen as modified. As a result, saving was not available.

To save the report, it was necessary to change its other property or object. In addition, the values of the specified properties were reset to their default values when preparing a report and after closing the preview window.

This bug has been fixed in the new version.

Connection to Stored Procedures in MsSQL

Once you select a procedure, a window with parameter settings, if any, will appear. Read more in the article.

We have added a new PrintOptimized property and a corresponding option in the export window. Enabling this option will greatly increase the quality of the exported image. However, the size of the output file will be bigger. 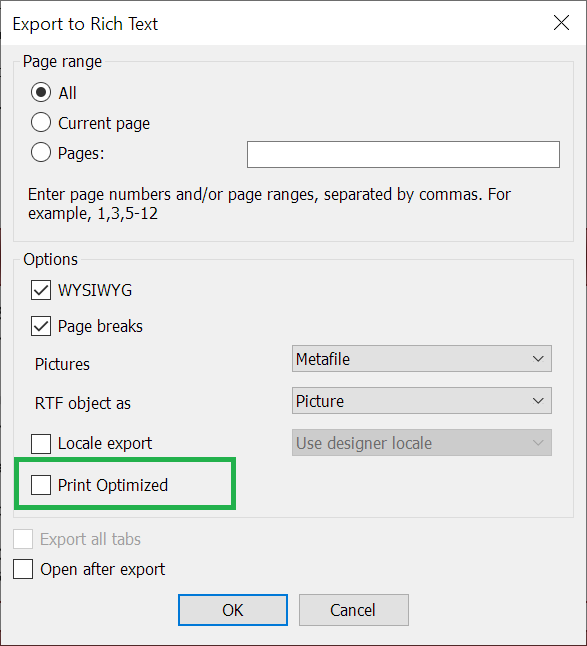 We have added a new option, UseFileStream, for exporting to Excel 2007. It can only be used when exporting from code to a file. This option is useful when exporting reports with a large number of pages (several tens of thousands) in multiple threads. This will help you avoid memory shortage errors. In other cases, it does not make much sense to use it and it is not recommended to do it. Example:

Accounting format when exporting to Excel 2007

You can now export the currency data format as an accounting format. To do this, a corresponding option has been added in the export window and the CurrencyToAccounting property. 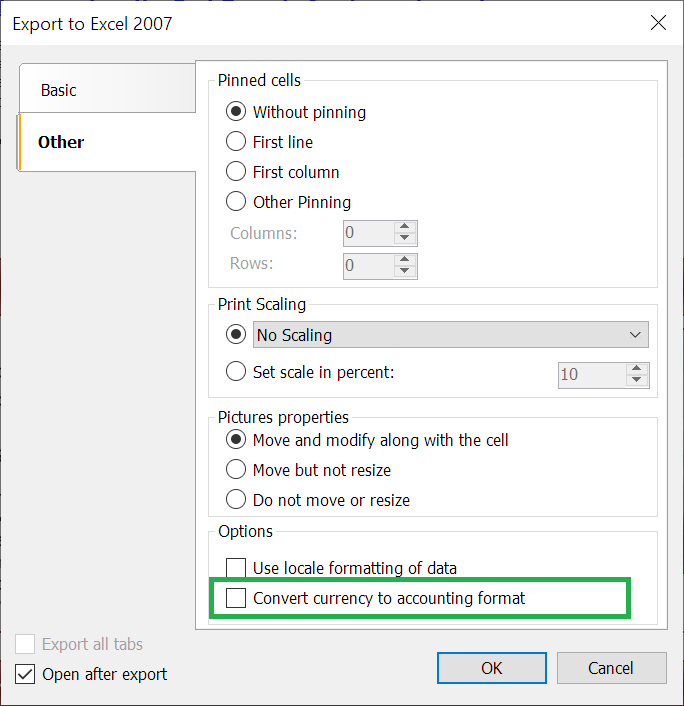 [Engine]
+ added property Report.IsPrepared;
+ added TextRenderType.Inline;
+ implemented converter of JasperReports templates;
+ implemented connection to stored procedures in MsSQL;
* increased minimum version of .NET Framework from 4.0 to 4.6.2;
* receiving JSON in the data source is exposed to the interface part;
- fixed a bug leading to System.ArgumentException when TextObject.FontWidthRatio property equal zero;
- fixed highlight of text in RTF parser;
- fixed multiple requests to get image when using URL in ImageLocation;
- fixed IsNull function;
- fixed a bug with drawing RichObject with aligned pictures;
- fixed an issue where the calculation of vertical distances was incorrect when converting RichObject to text;
- fixed AdvMatrix object bug with report refresh;
- fixed a bug with getting JSON row of JsonTableDataSource;
- fixed a bug leading to infinite loop when building table if there is not enough space on page for one row;

[Designer]
+ added ability to create calculated column for IEnumerable data sources;
+ added window with message about loading a report when opening a file;
+ added column with error numbers in table of report validation;
+ added the ability to hide and show columns with the number and type of error in the report validation table;
+ added notification form when trying to resave report that has already been modified;
+ added ability to show web preview of report that was opened from FastReport Cloud;
+ added ability to interact with data source from Cloud - downloading, uploading, updating;
* increased the speed of the report validator;
* the delete band button is now disabled in situations where the band cannot be deleted;
* changed root folder name on FastReport Cloud form, it depends now on localization;
* now there is not possible to create a table in the query wizard if another table with the same name already exists;
- fixed data tree view with IEnumerable data source, which column was not adding, if it consists of value type;
- fixed a bug with localization of the "Remove" button in the report properties on the "Script" tab;
- fixed a bug with selection object after click on row in "Validation" window;
- fixed a bug due to which selected object did not change when changing the height of the band with mouse;
- fixed a problem with System.OverflowException when editing text object without editor;
- fixed a bug causing System.StackOverflowException when copying formatting;
- fixed selection of object located on inactive page when clicking on row in "Validation" window;
- fixed showing progress of updating list of errors in "Validation" window when changing report;
- fixed an error with an invalid value when changing the line color in the MSChartObject editor;
- fixed order of switching by "Tab" key in connection forms;
- fixed a bug where the border properties of the chart axes were not saved when they were changed in the editor;
- fixed incorrect values when changing the interval in the stripes on the axes in MSChartObject;
- fixed an error that occurred when deleting a band through the band configurator if the classic mode for displaying bands is selected;
- fixed an error that occurs when clicking the "Delete" button on the configure bands form if there are no bands in the report;
- fixed an error that occurs when removing bands from the workspace with holding left mouse button;
- fixed restoring state of GridControl when closing column editor form;
- fixed an error that occurs when clicking on the "Cancel" button in the Grid object column editor;
- fixed displaying label about report change when changing MSChartObject;
- fixed moving columns of GridControl in column editor form;
- fixed bugs when dragging objects from the report tree to pages and the "Code" tab;
- fixed errors in the query constructor window when adding a table to the workspace and when creating relationships between tables;
- fixed a bug that caused a System.NullReferenceException when disabling the "FRX" tab if it is selected in the designer

[Preview]
+ added tooltip for the "Copy" field in the "Send by E-mail" form;
+ added zoom controls
- fixed display of the print form when increasing the display scaling;
- fixed a bug when new exports did not appear in the menu;
- fixed order of switching by "Tab" key in export forms;
- fixed left indent of RichObject;

[WebReport]
* reworked WebReport.ReportPrepared property, now this property is bound to the same report's property;
* updated WebReport design for FastReport.Core.Web and FastReport.Web.Blazor;
- fixed a rare crash when trying to add an empty data source to WebReport;
- fixed a bug due to which Outline did not work in WebReport.LoadPrepared();
- removed refresh button when loading prepared report (.fpx);
- fixed an issue due to which tabs of RichObject were incorrectly calculated in WebReport;
- removed page selection in export settings for single-page reports;