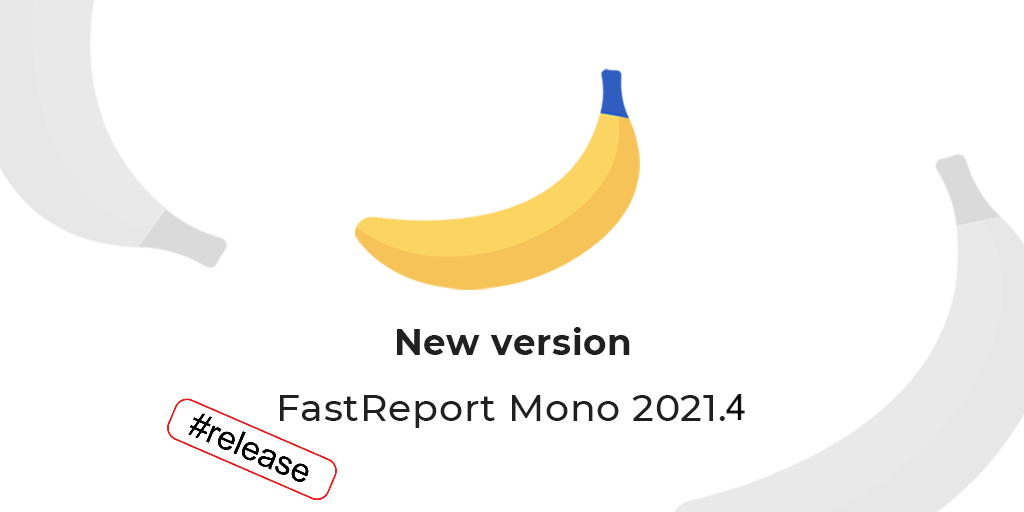 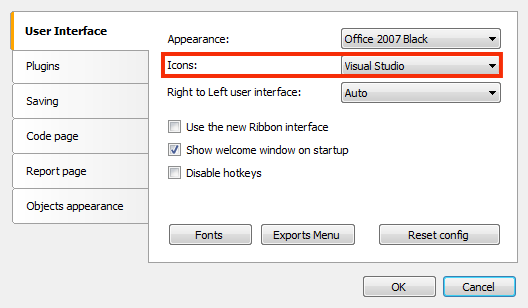 The new icons are well suited for hiDPI screens.

Added ability to reset the FastReport configuration stored in the FastReport.Config file in the user's profile. It can be done in the "View/Options/User Interface" window, the "Reset config" button. Restart of the designer is required in order to apply changes.

Added ability for the Text object to display DB filed names in a simplified form when designing a report. You can activate this option in the "View/Options/Objects appearance" window. This option is off by default. When you turn it on the Text object with a single DB field will display the field name part only, with no datasource name:

It makes the report look cleaner especially when it contains a lot of small objects. You still can see a full text of object in the status bar.

Added ability to set up each cell in the Matrix object's corner area. To do this use the cell's context menu and its commands "Split cell", "Merge cells":

Added ability to connect to ElasticSearch. Connection available in data wizard and from code.

Added the collapse all/expand all buttons and, a search field for the report tree and data tree in the designer. When clicking on + tree will expand. On - tree will collapse.

These changes should simplify working with reports containing many objects and/or data sources.

The RichText to report objects converter has been significantly improved and optimized.

Packages with FastReport.Data plugins have been updated. Now they include plugins for different FastReport editions (.NET, Core, CoreWin, OpenSource) and automatically connect the necessary library, depending on the product you use. The FastReport edition 2021.3.0 or higher is required for correct work.

In the logic of the localization change small changes were made.

- Fixed bug with Dock and Anchor properties of the objects that are inside the Table/Matrix cell.

- Fixed bug with SVG export if the system's DPI setting is greater than 96DPI.

+ Added the Res.LoadLocale (CultureInfo) method, which changes the selected locale by the CultureInfo argument. Loaded locales are cached. For correct operation, the added FastReport.Localization package is required.

- Fixed a bug with SubreportObject on a page footer band which caused StackOverflow exception.

- Fixed a bug with Dock and Anchor properties of objects inside table/matrix cells.

- Fixed a bug leading to System.ArgumentException when drawing PictureObject located outside the band.

- Fixed a bug with incorrect work of right anchor (Anchor = AnchorStyles.Right) when page has unlimited width.

- Fixed a bug with replacing a custom font with a default font when preparing a report.

- Fixed a bug with vertical alignment when converting RTF (by default, now Top instead of Center).

- Fixed a bug with converting RTF tables to report objects.

+ Added simplified display of DB field names in the designer.

- Fixed a bug leading to the crash of the report designer with an incorrect table in the data source.

- Fixed the names of files saved in the zip archive.

- Fixed XPS export bug where documents exported on Linux would not open on Windows.

- Fixed bugs with incorrect work of Anchor and Dock properties when exporting pages with unlimited width.

+ Added package 'FastReport.Localization', which includes FastReport localization files in your project for working with different languages.

+ Implemented transition to list of reports, when clicking on the arrow on folder in new demo.

* Changed color of inactive buttons in the thumbnail view mode of new demo.

* Changed background color of the zoom slider in new demo.

* Changed the location of the folder with report thumbnails for the demo application. Now this folder is located not in Program Files but in AppData\Local.

- Fixed a bug that caused saving a prepared report when clicking on the drop-down items in the save menu of the new demo application.

- Fixed a bug with alignment of reports in preview window of the new demo.

- Fixed a bug with double launching dialog formа when selecting a report in new demo.

- Fixed a bug with stretching thumbnails in the new demo.

- FIxed a bug leading to a lag when moving the window of new demo.

- Fixed a bug in the new demo with simultaneous displaying of thumbnails in folder and report bars.