Release of Visual Studio 2015 Preview includes new version of C# and VB.NET compilers called "Roslyn".
Roslyn is a complete rewrite of C# and VB.NET compilers; if previously they were written in C++, now C# compiler is written in C#, and VB.NET compiler - in VB.NET respectively. Also Roslyn is fully open sourced and available on GitHub.
When using the previous compiler, developer couldn't affect the compilation process. New compiler follows the idea of Compiler-as-a-Service: now it's a platform with API that allows the developers taking part in the compilation process.

Refactoring becomes much easier. Developers of Visual Studio extensions can use the infrastructure of Roslyn to not waste their time on writing parsers and analyzers.
Roslyn can be used in .NET applications to compile and execute dynamically generated code.
Roslyn can greatly help in translating C# code to another programming language.

New features based on Roslyn in VS 2015

Ctrl+. now contains the preview window that allows developers evaluating the result of the command.

The menu Ctrl +. collected new commands to solve problems with the code and refactoring commands. 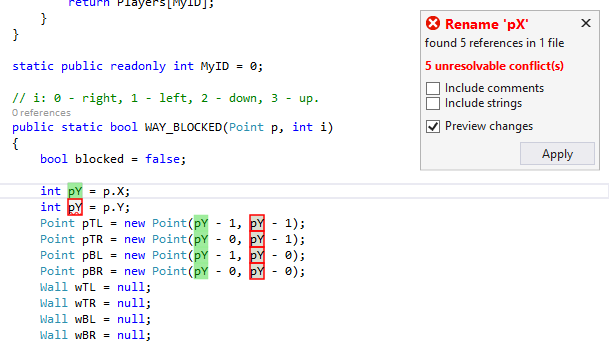 Preview is available in renaming interface and it shows messages about possible errors.